In the acute phase of articular cartilage damage, the treatment consists of resting the joint, elevation, ice, compression, anti-inflammatories and routine physiotherapy modalities. As the swelling and pain diminish, it is important to commence a range of motion exercises to regain movement of the knee fully.

Occasionally in the situation of a tense haemarthrosis, the knee can be aspirated under sterile conditions to remove the blood from within the joint, and some local anaesthetic can be injected into the knee to help with pain relief. The aspirated blood should be placed into a container and left to stand. If the injury involves a fracture of the underlying bone, in other words, if the damaged fragment that has been knocked off includes cartilage and bone, then usually droplets of fat from the bone marrow are released into the knee and these are visible in the aspirated fluid and will float to the top pf the aspirated blood if left to stand.

The subsequent management of this condition depends on whether the presentation is acute or chronic.

The treatment in this situation depends on the size and thickness of the fragment that has been knocked off and the age of the patient.

The acute phase treatment outlined above can certainly be attempted within the first seven to ten days of an injury of the knee. If there is a large attached bony piece to the articular cartilage fragment that has been knocked off, then given up to two weeks, it may be feasible to reattach it. However, once beyond this point, there is really not much point in attempting to reattach the fragment as it is unlikely to heal, and in this situation, chronic treatment options are used.

It is important to address any underlying ligament instabilities either at the same time or shortly afterward so as to stabilise the knee and to protect whatever technique of treatment that has been undertaken to the articular cartilage damaged area. This may include anterior cruciate ligament reconstruction and patellofemoral stabilisation.

There is debate as to the treatment for asymptomatic lesions, but if they are small in size there is some literature to suggest that they should be left alone. The treatment options for isolated articular cartilage lesions include:

The principles behind Hyaluronan Injections are to decrease pain and improve function in patients with joint pain. Hyaluronan injections have been shown to have the following beneficial effects on joints: – They replace some of the normal ingredients found in synovial fluid (hyaluronans) improving the lubricating ability.

This would include the removal of any loose flaps of articular cartilage that may be present. This is usually done arthroscopically. The size, depth and location of the lesion are recorded. If the lesion is small and less than 1 cm in diameter, this may be all that is required. If the overlying articular cartilage flap is loose in the joint, then this is removed. In acute osteochondral fractures, where the articular cartilage piece has come off with a sizeable chunk of bone, the piece can be reattached and fixed with a screw, but unless the bony piece is sizeable, the overlying cartilage will usually not heal and it may therefore be better to remove the piece. In osteochondritis dissecans, as the underlying problem is with the bone, there is really no point in trying to fix these pieces back on if they are loose, as the cartilage will not heal. Similarly, if the piece that has been knocked off is essentially all cartilage, this should be removed, as reattaching it will serve no function as it cannot heal. If the overlying articular cartilage is loose but is attached, then one option that has been suggested is to drill through the cartilage in order to try and get the underlying bone to provide nutrition to the overlying cartilage and try and get it to heal.

Once the underlying bone is exposed, the aim of the treatment is either to fill the defect with scar tissue or to try and transplant viable cartilage cells into it. Full-thickness articular cartilage defect does not heal on its own to form normal hyaline articular cartilage in humans. The aim of microfracture is to make holes in the exposed bone using a bone awl. The hole will penetrate the subchondral plate and cause bleeding into the defect. The blood will then go on to form a clot and trap fibrous tissue-producing cells in the clot. These cells then can produce fibrous tissue (scar tissue) to fill or partially fill the defect. The filled defect is not normal articular cartilage but will cover some or all of the exposed bone. 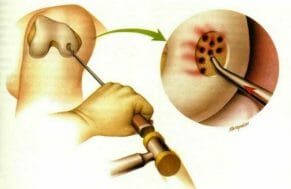 The above microfracture principles can be performed using a high-speed burr or a drill to make the holes in the bone. However, these techniques result in the production of heat which is detrimental to cells. It is therefore believed that the fibrous (scar) tissue produced by these two methods is inferior in quality and less in volume than with microfracture. 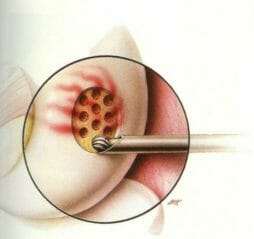 This technique involves taking a “plug(s)” of bone and overlying cartilage from one part of the knee and implanting the plug(s) into the cartilage defect. This does have some limitations for both the donor and graft sites and really is “robbing peter to pay paul”. It is going out of favour. 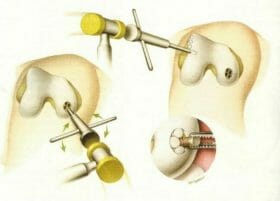 This procedure is a state-of-the-art technique that is being performed by selected surgeons, of whom Prof Jari is one. It involves taking a small sample of healthy cartilage from the knee arthroscopically and sending it to a lab to culture the cartilage cells. The cells are then returned back and implanted into the knee defect at a second operation. The early to medium-term results are very promising. 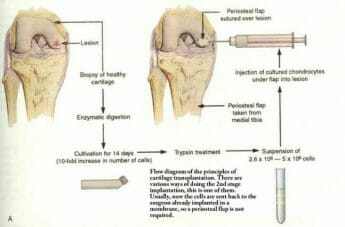 The rehabilitation in the acute phase involves reducing swelling and pain and regaining motion, muscle strength, balance and coordination.

If the articular fragment has been reattached, post-operative rehabilitation would include a period of non-weight bearing on crutches of between two to four weeks, during which time range of motion exercises are continued. Twisting motions and kneeling/squatting are prohibited to prevent shear forces across the reattached fragment for once again, between four to six weeks.

Following the two to four week period of time, weight bearing is commenced from partial to fully weight bearing as tolerated, using crutches. The rehabilitation is progressed to increase strength, balance and coordination using physiotherapy modalities and exercise/gym equipment.

With an attached boney fragment, this should certainly heal to the underlying bone bed within six weeks. The articular cartilage reattachment on its own without a bony fragment can take up to eight to twelve weeks. Twisting, turning and impact sports are usually gently recommended from about three months onwards depending on the underlying surgery and aetiology of the osteochondral injury.

In the chronic situation following articular cartilage debridement, microfracture, mosaicplasty or chondrocyte transplantation, once again the initial rehabilitation involves reducing swelling and controlling pain with the use of anti-inflammatories, a TED stocking and a Cryocuff.

The patient is mobilised non-weight bearing for a period of two to six weeks, dependent on the size and depth of the lesion. Once this period is over, increased weight bearing is commenced over a period one to two weeks, and increasing resistive non-impact loading exercises are continued. Twisting and pivoting sports are generally returned to within three to five months, dependent upon the completion of appropriate muscle strengthening, balance and coordination exercises, as well as progressing through a sports-specific rehabilitation programme.

If there is an associated ligament injury, such as an anterior cruciate ligament injury, I usually will not reconstruct this at the same time as treating the articular cartilage injury. The reason for this is that the rehabilitation is contradictory for the two conditions, and it is important not to jeopardise the rehabilitation of one condition due to a concurrent treatment that has been undertaken for something else. Therefore the articular cartilage lesion can be treated and rehabilitated. Once this has been done, the cruciate ligament reconstruction and/or treatment of the patellofemoral joint can be undertaken.

In certain situations following treatment of an osteochondral injury, it may be appropriate to use an offloading brace, which diminishes the force on the appropriate compartment of the knee, where the osteochondral damage occurred and mobilisation may be commenced at an earlier stage. The problems with an offloading brace are that it can be quite uncomfortable, and can cause pressure on the knee where the forces are applied to offload the knee. It can also cause a reduction in knee movement if the range of motion exercises are carried out in the brace. The braces are also expensive. Following successful microfracture, articular cartilage infill can occasionally be demonstrated on a high-resolution MRI scan. This can also be demonstrated following articular cartilage transplantation.

The appropriate treatment for you depends on many factors and will have to be assessed by the specialist treating you. Price packages will be personalised to you and your needs. We also work with multiple hospitals to offer our patients a price match service. Please get in touch if you wish to book a consultation with Professor Jari, one of Manchester’s leading Knee Surgeon.