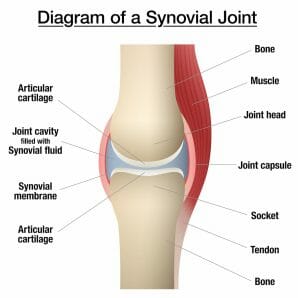 The articular cavity of the knee joint is the largest joint space of the body. The cavity includes a space between and around the tibial and femoral condyles but also extend upwards behind the patella to include the patello-femoral articulation and further into the supra-patellar bursa which lies between the tendon of the quadriceps femoris muscle and the femur.

The infra-patellar fat pad which lies below the patella represents an anterior section of the median septum of tissues with the cruciate ligaments separating the two tibio-femoral articulations into medial and lateral compartments. From the synovial surface of the infra-patellar fat pad, a vertical fold frequently passes towards the cruciate ligament and attaches to the intercondylar fossa of the femur, anterior to the ACL and lateral to the PCL. This is called a ligamentum mucosum.

The numerous folds and recesses within the knee are potential sites for collection of wear debris, loose bodies and bacterial contamination. All these recesses need to be assessed arthroscopically in these situations.

The capsule of the knee joint is a fibrous membrane containing areas of thickening that may be referred to as discreet ligaments. The anterior capsule is thin and directly anterior it is replaced by the patellar ligament. Proximally the capsule of the knee joint attaches to the femur approximately three to four finger breadths above the patella. Distally it attaches circumferentially to the tibial margin except where the popliteal tendon enters the joint through the hiatus. Posteriorily the capsule consists of vertical fibres that arise from the condyles and from the walls of the intercondylar fossa of the femur. In this region the capsule is augmented by the fibres of the oblique popliteal ligament, which is derived from the semi-membranous tendon. This broad flat band is attached proximally to the margin of the intercondylar fossa and posterior surface of the femur close to the articular margins of the condyles. The oblique popliteal ligament forms part of the floor of the popliteal fossa and the popliteal artery rests on it.

Because almost all tendons at the knee lie parallel to the bone and pull lengthwise across the joint, bursae are numerous (Fig 3, page 61, The adult knee). Bursae are potential sacs separating tendons from bones and skin. They contain a microscopic fluid layer and allow tendons to move over bones smoothly. They can become inflamed and fill with fluid to form lumps around the knee.

Medially the bursa anserina lies deep to the pes anserinus tendons (sartorius, gracilis and semi tendinosis) and separates them from the tibial collateral ligament. The bursa of the semi membranosis muscle lies between the muscle and the tibia.