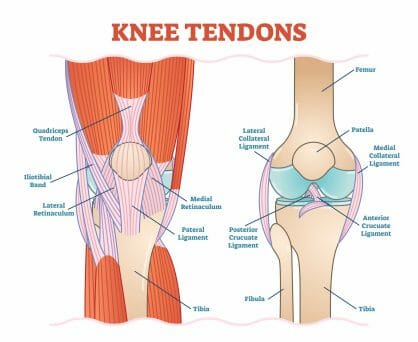 The semi-tendinosis, semi-membranosis and biceps femoris muscles are collectively known as the hamstrings and all originate from the ischial tuberosity of the pelvis. All the knee flexors except for the short head of biceps femoris and the popliteus are two joint muscles (ie crossing the hip and knee joint). Four of the flexors (popliteus, gracilis, semi-membranosis and semi-tendinosis) medially (or internally) rotate the tibia on the fixed femur, whereas the biceps femoris is a lateral rotator of the tibia. The semi-tendinosis, semi-membranous and biceps femoris muscles (hamstrings) flex the knee and extend the thigh. Because the muscles used reproduce a combined maximal excursion at one joint (eg extension of the thigh) they will limit movement at the other joint to less than maximal. Therefore they work most effectively at the knee joint if they are lengthened over a flexed hip.

The tendon of the gracilis muscle in addition to the sartorius and semi-tendinosis insert into the medial tibia to form part of the pes anserinus (goose’s foot). These muscles collectively insert anterior and proximal to the insertion of the superficial medial collateral ligament (SMCL). The gracilis flexes the knee joint and produces slight medial rotation of the tibia. The three muscles of the pes anserinus appear to function effectively as a group to stabilise the medial aspect of the knee joint.

The popliteus muscle is a one joint knee flexor (in addition to the short head of biceps femoris). The popliteus flexes the knee and rotates it medially serving as a medial rotator of the tibia and the femur. The popliteus muscle may play a role in initiating unlocking of the knee because it reverses the direction of automatic external rotation that occurs in the final stages of knee extension (screw home mechanism).

The knee joint is a modified hinge joint (ginglymus). The active movements of the knee joint are described as flexion, extension, medial rotation and lateral rotation.

The flexion and extension at this joint differ from those of a true hinge as the axis about which the movement occurs is not fixed, but translates upwards and forwards during extension and backwards and downwards during flexion. The knee joint possesses limited inherent stability from the bony architecture. The lack of conformity between bony surfaces allow 6° of freedom of motion about the knee including translation in 3 planes (medio-lateral, antero-posterior, proximo-distal) and rotation in 3 planes (flexion/extension, internal/external, varus/valgus).

With the foot fixed on the ground the last 30° of extension is associated with medial rotation of the femur. Compared with the medial femoral condyle, the articular surface of the smaller lateral femoral condyle is a rounder and flattens more rapidly anteriorly. Consequently, it approaches a more fully congruent relationship with its opposed tibial meniscal surface, some 30° before full extension has been obtained. To achieve full extension, the lagging medial compartment must medially rotate about a fixed vertical axis while moving backwards in an arc.

There is progressive increase in passive mechanism that resists further extension. In full extension parts of both cruciate ligaments, the collateral ligaments the posterior capsular and oblique posterior ligament complex and the skin and fascia are all taught. There is also passive or active tension in the hamstrings, gastrocnemius muscles and the ITB. In addition the anterior parts of the menisci compress between the femoral condyles and the tibia.

At the beginning of flexion, the knee “unlocks” with an external rotation of the femur on the tibia. This is partly related to the opposite interplay of the meniscal articular and ligamentous structures involved but is also brought about by the contraction of the popliteus muscles. It pulls downwards and posterior on its attachment to the lateral condyle of the femur helping the greater roll back in this compartment which occurs with flexion. Via its meniscal attachment the popliteus pulls on the posterior horn of the lateral meniscus. In this way, while rolling back, the posterior motion of the menisci occurs in both compartments, the greater motions laterally can be facilitated. The menisci which are squeezed between the joint surface in extension are moved posteriorly with the femur in flexion, the lateral more so than the medial. With terminal extension achieved and the knee locked by the femur rotating internally on the tibia, this is called the screw home mechanism.

Flexion is checked by the quadriceps mechanism, the anterior parts of the capsule and the PCL and by the compression of the soft tissue structures in the popliteal fossa.

As mentioned previously the movements of the knee are flexion, extension and rotation. Flexion is performed by the hamstrings and biceps femoris and to a lesser extent the gastrocnemius and popliteus.

Flexion is limited by the soft tissues at the back of the knee.

Extension is performed by the quadriceps and because of the shape of the articulation and ligament attachments, the femur rotates medially on the tibia in terminal extension, the screw home mechanism that locks the joint. This movement is purely passive as are other rotatory movements occurring during flexion/extension and is due to articular geometry and static stabilisers.

The exception is lateral rotation of the femur that proceeds flexion by unlocking the joint. This movement is performed by the popliteus muscle. The sartorius, gracilis and hamstrings are weak rotators of the knee but probably do not act as such primarily.