What are Cruciate Ligaments?

The cruciate ligaments consist of a highly organised collagen matrix which accounts for approximately three-fourths of their dry weight. The majority of the collagen is type 1 (same as in bone) (90%) and the remainder is type 3 (10%). Water constitutes 60% of the net weight under physiological conditions.

The cruciate ligaments are named based on their attachments on the tibia and their relationships to the intercondylar eminence of the proximal tibia. They are essential to the function of the knee joint. The cruciate ligaments act to stabilise the knee joint and prevent antero-posterior displacement of the tibia and the femur. They also contain numerous sensory endings implying an important role in proprioceptive function. These ligaments are intra-articular but because they are covered by synovium they are considered extra-synovial. They receive their blood supply from branches of the middle genicular and both inferior genicular arteries. 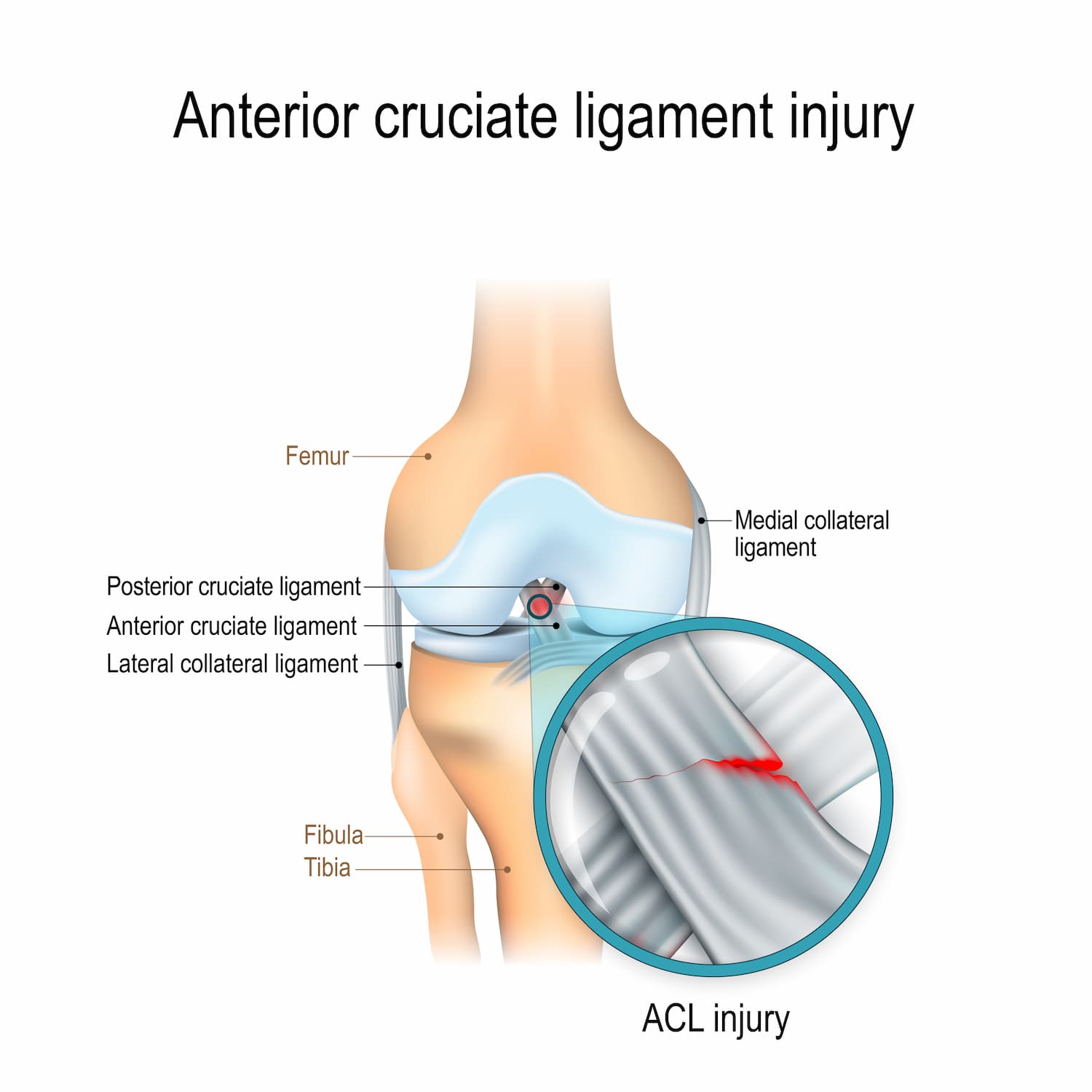 The Anterior Cruciate Ligament (ACL) originates from the medial surface of the lateral femoral condyle posteriorily in the intercondylar notch in the form of a segment of a circle. The ligament courses anteriorily, distally and medially towards the tibia. Over the length of its course the fibres of the ligament undergo a slight external rotation. The average length of the ligament is 38mm and the average width 11mm. The tibial attachment is a wide depressed area anterior and lateral to the medial tibial tubercle in the intercondylar fossa. The tibial attachment is more robust than the femoral attachment. There is a well marked slip to the anterior horn of the lateral meniscus. Morphologically it is felt that the ACL is composed of two bands, the anteromedial band and the posterolateral band.

The ACL is a prime static which stabilises against anterior translation of the tibia on the femur accounting for up to 86% of the total force resisting anterior draw. The ACL also plays a lesser role in resisting internal and external rotation.

The maximum tensile strength of the ACL is approximately 1725 +/- 270 newtons. This is less than the peak forces that occur in vigorous athletic activity. Stability is enhanced by dynamic stabilisers such as muscles that exert a force across the knee joint. The ACL plays an important proprioceptive function because of the variety of receptors in the anterior cruciate ligament. In people with ACL deficient knees, a significantly higher threshold for detecting passive motion of the involved knee has been reported.

On the MRI scan the normal ACL has a relatively low signal. With a tear, the ACL on MRI appears bright with lots of fibre definition.

We also have information on ACL Reconstruction.

The Posterior Cruciate Ligament (PLC) originates from the posterior part of the lateral surface of the medial femoral condyle in the intercondylar notch. The PCL has an average length of 38mm and an average width of 13mm. It is narrowest in its mid portion and fans out to a greater extent superiorly and inferiorly. The fibres are attached to the tibial insertion which occurs in a depression posterior to the intra-articular upper surface of the tibia. This is therefore outside the knee joint per se. The attachment extends for up to 1cm distally onto the adjoining posterior surface of the tibia. Immediately proximal to the tibial attachment the PCL has slips that blend with the posterior horn of the lateral meniscus. These slips variably pass anterior to the PCL (ligament of Humphrey) and/or posterior to the PCL (ligament of Riesburg).

The PCL is considered to be the primary stabiliser of the knee because it is located close to the central axis rotation of the joint is almost twice as strong as the ACL. The PCL has been shown to provide approximately 95% of the total restraint to posterior translation of the tibia on the femur. The PCL is maximally taught at full flexion and also becomes tighter with internal rotation. Two inseparable components of the PCL have been identified. The anterior fibres form the bulk of the ligament and are believed to be taut in flexion and lax in extension. The opposite applies to the thinner posterior portion which is taut in extension and lax in flexion. The PCL appears to function in concert with the LCL and popliteus tendons to stabilise the knee

Injuries to the PCL are less common than the ACL and usually result from hyperextension or anterior blows to the flexed knee. Rarely do these injuries result in symptomatic instability but they may be associated with chronic pain. Significant degenerative changes that involve the medial compartment in 90% of cases have been associated with chronic PCL injuries.