The knee is the largest synovial joint in the body. It is composed of 3 bones and 3 joints although 2 of the 3 joints share a common cavity.

The femur is the longest and strongest bone in the body. The shaft of the femur is nearly cylindrical, fairly uniform in calibre and the shaft has a bow with the apex anteriorily progressing from proximal to distal. 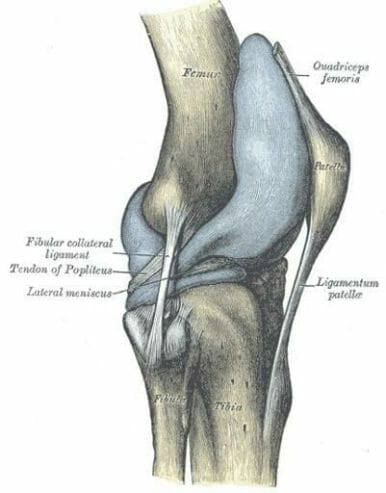 The fibula is a long slender bone that lies parallel and lateral to the tibia. It does not participate in weight-bearing but rather serves the muscle and tendon attachments. The head of the fibula is knob-like, and superiorly slanted towards the tibia, is the almost circular articular surface which participates in tibiofibular articulation. At the postero-lateral limit of the articular facet the apex of the head projects upwards and provides attachment for the lateral (fibula) collateral ligament (LCL) of the knee joint. The tendon of biceps femoris muscle attaches to the lateral aspect of the head of the fibula.

The proximal tibia is expanded to receive the condyles of the femur. The shaft of the bone flares out into lateral or medial buttresses which form the medial and lateral condyles. The tibia is the weight bearing bone of the leg whereas the fibula serves the muscular attachments and for completion of the ankle joint. The superior articular surface of the tibia presents two facets. The larger medial facet is oval in shape and has a slight concavity. The lateral facet is nearly round and although concave from side to side, it is convex in front. The rims of the facets are in contact with the medial and lateral menisci but the central portions receive the condyles of the femur. Both tibial facets have a posterior inclination with respect of the shaft of the tibia of approximately 10°. On inspection of the tibial plateau, it would appear as though the femoral and tibial surfaces do not conform. However, this is more apparent than real. In the intact knee the menisci enlarge the contact area considerably and increase conformity of the joint surfaces.

On the anterior aspect of the proximal tibia, the tibial tuberosity is the most prominent feature and is the attachment site of the patellar tendon. Approximately 2 to 3 cm lateral to the tibial tubercle is Gurdy’s tubercle, which is the insertion site of the ilio-tibial band (ITB). Posterior to Gurdy’s tubercle, the lateral condyle has a nearly circular facet on its postero-inferior surface for articulation with the head of the fibula.

The patella is the largest sesamoid bone in the body and is situated in the tendon of the quadriceps femoris muscle. It articulates against the anterior articular surface of the distal femur. It holds the patellar tendon off the distal femur thus improving the angle of approach of the tendon to its distal insertion on the tibial tuberosity, so increasing the power generation of the quadriceps mechanism by 30%. The anterior surface of the patella is convex. The superior border is thick and gives attachment to the tendinous fibres of the rectus femoris and vastus intermedius muscles. The lateral and medial borders are thinner and receive the tendinous fibres of the vastus lateralis and vastus medialis muscles respectively. These two borders converge inferiorly to the pointed lower pole of the patella which gives attachment to the patellar ligament.

The articulation between the patella and femoral trochlea forms the patello-femoral knee joint compartment. The articular surface of the patella is described as possessing seven facets. Both the medial and lateral facets are divided vertically into approximately equal thirds, whereas a seventh or odd facet lies along the extreme medial border of the patella. Overall the medial facet is smaller and slightly convex, the lateral facet which consists of roughly two thirds of the patella has both sagittal convexity and coronal concavity.

Six variants of the patella have been described. Types one and two are stable whereas the other variants are more likely to result in lateral subluxation as a result of unbalanced forces. The facets of the patella are covered by the thickest hyaline cartilage in the body which may measure up to 6.5mm in thickness.

The main biomechanical function of the patella is to increase the momentum of the quadriceps mechanism. The load across the joint rises as flexion increases but because the contact area also increases, higher forces are dissipated over a larger area. However, if extension against resistance is performed, the force increases while the contact area shrinks. Straight leg raises eliminate forced transmission across the patello-femoral joint because in full extension the patella has not yet engaged the trochlea.

The superior tibio-fibula joint is a synovial joint lined by synovial membrane possessing a capsular ligament that is strengthened by anterior and posterior ligaments.

There are a number of nerves and arteries that run in close proximity to the proximal end of the fibula. The anterior tibial artery, the terminal branch of the popliteal artery, enters the anterior compartment of the leg through the opening in the interosseus membrane two finger breadths below the superior tibio-fibula joint. The anterior tibial nerve and a terminal branch from the common peroneal nerve also pierces the anterior interosseus ligament and comes to lie lateral to the artery. The superficial peroneal nerve arises from the common peroneal nerve on the lateral side of the neck of the fibula and runs distally forward in the substance of the peroneus longus muscle.